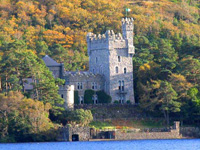 Glenveagh National Park lies in the heart of the Derryveagh Mountains in the north-west of Co. Donegal. It is a remote and hauntingly beautiful wilderness of rugged mountains and pristine lakes. The Park, over 14,000 acres in extent consists of three areas. The largest of these is the former Glenveagh Estate, including most of the Derryveagh Mountains. To the west are the quartzite hills around Crocknafarragh and to the south, the peatlands of Lough Barra bog, Meenachullion and Crockastoller.

Glenveagh is the haunt of many rare and interesting plants and animals and is famous for it’s fine herd of red deer. The Park contains the peaks of the two highest mountains in Co. Donegal, Errigal (752m) and Slieve Snaght (683m). The steep sided valley of Glenveagh holds the 5.5km-long Lough Veagh.

Much of the land which comprises modern Glenveagh National Park was originally consolidated into a single holding in the 19th Century by John George Adair, a wealthy land speculator from Co. Laois. The holding was managed as a private deer forest until 1975, when it was sold to the state and placed in the care of the Commissioner of Public Works to become a national Park.
A fine Victorian castle surrounded by beautiful gardens is picturesquely located on the eastern shore of the lake and provides the focal point for visitors to the Park. The last private owner Henry P. McIlhenny donated the castle, including much of its contents in 1983. The Park and gardens were officially opened to the public in 1984 and the Castle in 1986.